This morning I received your telegram and learned that you sent us another two parcels for which I am most grateful. My mother’s parcel is in our possession. She was ill when it arrived and wasn’t at home. I haven’t received my parcel yet. I normally have to collect it in person, but my father will take care of it this afternoon. Meanwhile, you must be thinking that Lya is a fine one, making a fool of us like that. But nothing could be farther from the truth; it was a question of survival.

I told you we had run away because my father had been taken hostage. The truth is that my father was in Heino labor camp. We kept it from you because we were strangers and saw it as our only way out. Mr. van Meteren knew all of this, but he owed me a favor and promised to keep quiet. How they managed to find us remains a complete and utter mystery.

Please also accept my apologies for the fact that you’ve heard so precious little from me since we left, only a couple of short messages. But let me make up for it with a long letter, describing what happened after our arrest.

The day they took us away they brought us to the police station in Naarden where we were treated with the utmost kindness. But a police station isn’t a hotel and my mother and I had to sleep on the ground that night on a pile of old curtains with our coats and a couple of leather jackets kindly donated by the police as blankets. That same evening Mr van Meteren appeared out of the blue. Up to that moment we—the police included—had presumed that he was the one who had turned us in, but when we spoke with him we were completely convinced of his innocence. But when I think about it now, I’m not so certain. The question is still open, but whatever it takes I’ll get to the bottom of it. I’m determined to find out who played this dirty trick on us.

After you brought us bread the following morning, the police provided tea and bread with chocolate sprinkles from a hotel in Naarden (I forgot the name). Around eleven, an inspector and the same policeman who arrested us that afternoon took us to Amsterdam in a luxury car. We arrived at noon in the pouring rain. We were taken immediately to the headquarters of the Security Police and interrogated. I’ll spare you the gruesome details at this juncture!

Then we were taken to the prison and handed over to the German police. Unsurprisingly, we had to hand over all our valuables as well as our suitcases and were only allowed to keep what was absolutely necessary for toilet purposes. To our great surprise we were pushed into a laundry room, the tenth and eleventh in a row, all of them ladies from well-to-do families who had done precisely the same as we had done.

It was disgusting. We slept on straw bags on the floor and had to go to the toilet in a little barrel in a corner of the room, which stank to high heaven all day long. We had to get up at seven in the morning and go to bed at nine. Each day we were allowed, under strict supervision, twenty minutes of fresh air in a so-called “air cell” with bars on top. They kept us there from Thursday October 8th to Monday October 12th. You’ll probably have received a request to send me pyjamas there. But they turned out to be no longer necessary because they woke us at six in the morning on October 13th! and bundled us onto a train for Westerbork.

First we had to line up with about 200 other victims, all of them sophisticated and sociable, ranging in age from 3 months to 85 years. Then they returned our baggage and our money! When I examined my suitcase I noticed that the following had disappeared: my white winter sweater, a hot water bottle, and two beautiful lanterns. Where they went is a mystery.

We were then taken in police vans to Adama van Scheltema Square, where the Jewish Council for Amsterdam has its office. This was an opportunity to pass on a sign of life through the Jewish Council to you, Elisabeth, and Kees. They gave us bread, coffee, sausage and even cigarettes. After everything we had been through they were so extraordinarily kind to us that we’ll never forget it for as long as we live.

In the afternoon we were told to collect our luggage and were taken in special trams through the streets of Amsterdam, past everything I loved so much and will find so hard to forget, to central station, where the train for Westerbork awaited us. The train left at 1:24 p.m. I had taken the same train so many times to Naarden. Imagine my feelings when the train passed Naarden and I cherished a secret hope that I might catch a glimpse of you or Mr. van Meteren. I managed to have a good look into Restaurant Ritte but that was all I saw.

In Hilversum station I saw one of Serban’s brothers. Serban leads the Hungarian Orchestra at Grand Hotel Gooiland in Hilversum. The boy seemed extremely surprised and I presume he’ll have told Kees that he saw me.

We arrived around eight on a splendid moonlit night and were taken by the SS on a one and a half hour walk to Camp Westerbork. I’ll spare you the details here too.

After we were registered and enjoyed a cup of warm milk, a military policewoman accompanied us to our barrack as if we were major criminals. I already mentioned barrack 83 in a previous letter. It was pitch dark and there were 200 beds, three high, without mattresses, pillows or blankets, and that’s where we were expected to sleep. Men and women, children and invalids, beautiful and ugly, young and old, all mixed together, and I’ve never witnessed such filth in all my days.

Although it wasn’t allowed, I filled in that night as Baracken­sanitäterin [Barrack Medic] (everything here is in German). The next morning no one was allowed outside. We were locked in and had to spend the entire day indoors. Because I had made myself so useful, however, the Barackenleiter [Barrack Leader] gave me a note asking the doctor to put together a first aid kit and that gave me the chance to go outside.

He also appointed me to keep a provisional eye on the sick people in my barrack, to help them and take care of them. I made a great many new friends and acquaintances at that time and also met several friends and acquaintances from Nijmegen, Den Bosch and Amsterdam. It was delightful. But after a few short weeks, the same people, or most of them at least, had deteriorated very badly.

My first thought was: They won’t get me!

Large numbers are transported out of the camp twice a week and it’s truly dreadful. We’re all terrified of being selected and you never know in advance. It’s the most terrible thing you can imagine. The torture people are forced to undergo, especially the mental torture, is beyond description. In the meantime, my mother has fallen ill and is suffering from major stomach cramps. I brought her to Barrack 70, the emergency hospital. She’s still there.

It’s hard to imagine a filthier place. Men, women and children together under one roof, all of them sick, and forced to eat and go to the toilet in the same space. I don’t have to tell you that my mother is getting worse by the day.

After I’d been here for three days and to my complete amazement, I saw my father. The man almost fainted, as you can imagine. It’s only now, of course, that I understand how it was possible for you to have received letters from him asking to let him know where we were. My father was living in Barrack 65 at the time.

I should tell you what happened when we received your parcels. Mother and I collected our own parcels from the post and the parcel with provisions ended up with my father. He in turn presumed that we had received similar parcels.

Our food regime is the following: in the morning a cup of bad coffee without sugar or milk, at noon a plate of thick soup or watery stew, in the evening 6 slices of bread with runny butter and another cup of coffee substitute. You can therefore imagine how urgently we need extra food. I didn’t really care at first because they told me I wasn’t allowed to stay in this camp as punishment for not volunteering to go to Westerbork. The police had to arrest me instead. I was expecting to be put on the next train heading east. But I just kept on working to get ahead.

It might seem impossible, but I managed to get a fantastic job. I’ve become private secretary to the Polizei-angestellte, the highest-ranking officer of the Sicherheitsdienst [Security Service] in Amsterdam. He’s a very nice young man and we work together all day long. The other inmates are madly jealous of me, yet they still chase me politely the entire day with a hundred-and-one requests. Imagine, I sit behind a desk with a really nice young gentleman opposite me wearing a large swastika. And he’s very kind to me.

As a result of the job I’m allowed to stay here on a permanent basis and can also keep my father and my mother here. It’s more than a dream. I’ve had to pinch myself now and again in the last three days to convince myself that it’s real. So I’m staying in Holland, and that allows me to stay in touch with the outside world.

Officially, I’m only allowed to write once a week and I’m limited to one side of a postcard. But this letter won’t be passing through the censors so I hope it gets to you. You can write to me as often as you’d like. Your letters won’t be checked. Write back soon. I’m so unbelievably anxious to hear from you.

Now that I’m here I’ve been given the opportunity to take a few days off soon. I plan to make a special trip to Naarden to tell you what we’ve been through since we last met. You know, there’s only one thing I don’t understand: Mr. van Meteren has never written. Is he perhaps in prison? Or is he angry at us, or is there another reason? I hope I never have to think such a thing.

For now, dear Mr. and Mrs. Coljee, accept my mother’s warm greetings. Send our best regards to all those we got to know and cherish in the short period we were with you. Although you’ve never made my father’s acquaintance, he also sends his best.

Should you want to visit me we can arrange it in due course, now that I no longer have to worry about being sent away from here. So, write back soon.
Much love and a heartfelt kiss to you both. 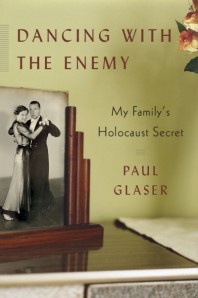